The antioxidant properties of arbidol and its structural analogs

It is well known that a great number of pathological conditions in the human body arise from the activation of a process called free-radical lipid peroxidation (LPO) [1-6].  To treat diseases associated with lipid peroxidation, we commonly use natural and synthetic antioxidants (AO), such as alpha-tocopherol, carotenoids, probucol, and others [7].  However, various pharmacological preparations may also produce antioxidant effects due to their mechanism of action.  These antioxidant properties have been discovered in anti-inflammatory drugs [8], spasmolytics [9], antiseptics, antihistamines and antiviral preparations [10].  Particular interest has been given to the study of the antioxidant properties of antiviral drugs, because viral infections are so often accompanied by the development of an inflammatory process in tissues, which intensifies the LPO process [10].  For this reason, the presence of antioxidant properties in an antiviral preparation is an important factor in its therapeutic and prophylactic mechanisms of action.

In light of the foregoing, the highly effective antiviral preparation arbidol has generated a large amount of interest [10].  Arbidol has anti-carcinogenic and radioprotective properties, and is an immunomodulator [11] and interferon inducer [12].  Along with this, there exist data concerning the antioxidant properties of arbidol.  Glushkov and his colleagues [13] studied the effect of arbidol on the intensity of chemiluminescence (CL) which accompanies oxidation of lipoprotein suspensions in egg protein.  It was shown that CL intensity was reduced by 50% in the presence of arbidol concentration equal to 0.9?10-5 M, which is 100 times less, than in the presence of amoxipin.  Therefore, arbidol suppresses the intensity of the LPO process to a greater degree, than the well-known antioxidant amoxipin.  However, as the authors themselves point out, it was not possible to fully determine the concrete mechanism by which arbidol slows the oxidation of lipoproteins in egg medium, because the reduction of CL intensity in the given model may show itself as the interaction of the preparation with free radicals, or could be the chelation and/or oxidation of bivalent iron.

In order to study arbidol’s concrete mechanism of action on the LPO process, we researched the drug’s effect on CL which accompanies the oxidation of tris buffer suspension of phospholipid (PL) liposomes (LS), induced by ions of bivalent iron [14].  The kinetics of CL in the given system can be divided into clearly delineated stages: a rapid burst CL, a latent period, and slow flash CL.  The use of tris buffer allows a good differentiation of the slow CL phase (which is directly reflected by oxidation in the lipid phase of the membranes) from the fixed luminescence in the liquid phase, which is observed along with oxidation of the phosphate buffer [13].  In addition, by the changes in the latent period, one can judge the effects of the substance under study on iron ion concentration.

In accordance with this, the goal of the present work was to study the effects of arbidol, and its structural analogs, on the CL kinetics, which accompany the oxidation of phospholipid liposome suspensions, induced by bivalent iron ions.

METHODS.  In the study we used alpha-tocopherol (“Serva,” Germany), ascorbate, EDTA (“Sigma,” USA), arbidol (ethyl 1 – methyl – 2 – phenylmethyl – 4 – dimetilaminomethyl – 5 – oxy – 6 – bromo – 3 – carboxylate hydrochloride monohydrate) and its structural analogs, 5-oxindol products, SP-224, SP-226 and SP-234.  Arbidol was created at the Moscow Center for Chemical/Medicinal Preparations (CCMP) which is part of the Russian Scientific Research Chemical-Pharmaceutical Institute, with participation by the Institute of Medical Radiology of Obninsk and the Pasteur Epidemiological Institute in St. Petersburg. The structural analogs of arbidol were kindly furnished by T.A. Guskova, the director of the CCMP’s Department of Experimental Chemotherapy and Toxicology.

In order to produce liposomes, phospholipids were obtained from the yolks of chicken eggs by the method of Folch et al. [15] with subsequent separation from neutral lipids and pigments in refrigerated, dehydrated acetone.  The PL concentration in the lipid extracts was determined gravimetrically.  The LS suspension was prepared by the method of Bangham et al. [17].  For this, a chloroform-methanol PL solution was evaporated in a vacuum rotor vaporizer. We added buffer solution (20 mM tris-HCl, pH 7.4) to the dry lipid residue and froze it.

The CL measurements were done with the chemiluminometer CLM-3 (“Bikap,” Russia).  The CL kinetics were assessed with the help of the Macintosh LC II MacLab/2e system (ADInstruments, Australia).  All the experiments were conducted at a temperature of 37 degrees C, under constant mixing.  The reaction medium contained LS suspension (0.4 mg/ml PL), 0.1 mcM chemiluminescence activator C-525 [18] in 20 mM tris-HCl buffer, pH 7.4.  Initiation of lipid peroxidation was effected by introducing 7 mcM FeSO4 solution in 0.001 N HCl.  Arbidol, alpha-tocopherol, SP-226 and SP-224 were dissolved in chloroform and added to the chloroform-methanol solution PL before formation of LS.  EDTA, ascorbate and SP-234 were added to the phospholipid liposome suspension, in the form of a solution in tris-HCl buffer before the addition of iron solution.

RESULTS AND DISCUSSION.  CL kinetics, accompanying the oxidation of phospholipids LS (Fig. 1), include a rapid flash CL, developing directly after the introduction of bivalent iron ions, a stage of suppression of luminescence, and a slow flash CL.  As was shown earlier [14], the amplitude of the slow flash CL (Io) and time from the moment of introduction of iron ions to maximum intensity of slow flash CL (latent period CL (To)) turn out to be the optimal parameters for the continuation of the LPO process in LS suspension.  Fig. 1 shows the effect of arbidol on CL kinetics in PL liposome suspension.  It is clear, that with an increase in its concentration (italic numbers), decrease in amplitude (I) and increase in the latent CL period (T) occurs. 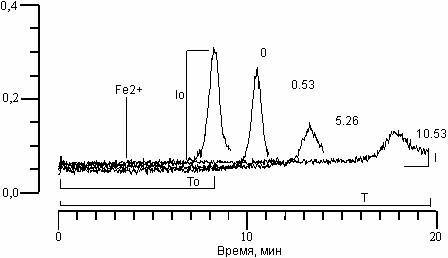 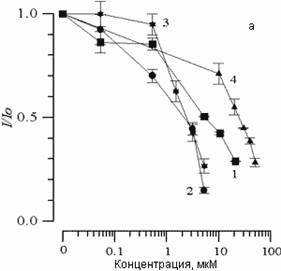 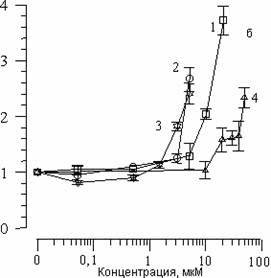 The table summarizes the resulting data on the effects of arbidol, its structural analogs, and other antioxidants on the oxidation in PL liposome suspension.  The designation of C50% for arbidol was 5mcM, which was two times higher than for SP-224 and SP-226, and 5.5 times lower than for SP-234.  Comparison of the resulting values for arbidol and its structural analogs with corresponding values for several other AO’s shows they are on the order of two to three times larger than for alpha-tocopherol, and about equal to the results for ascorbate.  Thus, in our system, arbidol and its products are less effective in antioxidant qualities than alpha-tocopherol, and roughly equivalent to ascorbate. This could be attributed in part to a lesser degree of solubility of arbidol in the lipid phase, compared to that of alpha-tocopherol.  It is interesting that the increase in CL latent period for arbidol and its structural analogs in these conditions are the same, at 1.5 (see Table 1).  This is three times smaller than for alpha-tocopherol, and six times smaller than for ascorbate.  It is important, however, that adding all of these substances to PL liposome suspension causes an increase of the CL latent period, while EDTA, which is associated with iron ions, decreases it.  As is clear from the table, a two-time decrease of the latent period came from EDTA concentration 1.4 mcM.

Table 1.  Effects of arbidol, its structural analogs, and other antioxidants on peroxidation of phospholipid suspension LC.